The head of one of Wales’ most successful independent TV companies is creating a “mini-John Lewis” and handing it all over to the staff. Dylan Huws, managing director of Caernarfon-based production company Cwmni Da, is turning the £5 million a year firm into an Employee Owned Trust. The move is believed to be a first in the UK broadcast industry and is being project-managed by the Wales Co-operative Centre. 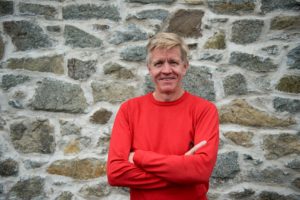 With legal advice from a top Cardiff-based firm, Geldards, they have drawn up a five-year business plan which will see Mr Huws selling his shares to the trust. The award-winning company employs 50 staff and a host of freelancers and is based at a state-of-the-art production centre in the Goleuad building on Victoria Dock. Cwmni Da was founded in 1996 and has a long and successful track record making factual, entertainment, drama and children’s programmes, mainly in the Welsh language for S4C. Their output includes some of the channel’s biggest hits like Fferm Ffactor, Noson Lawen, Deian a Loli, Dim Byd, and Ffit Cymru.
They are currently working on an international co-production with Scottish independent firm MacTV and LIC, the biggest independent television production company in China, on a new series about the world’s tides. Filming has already taken place in Norway, The Netherlands, Canada, Korea and China. Since last December Mr Huws has been the sole owner of the company after his fellow directors Neville Hughes and Ifor ap Glyn decided to step down, both still work closely with the company with Neville Hughes currently leading on a number of key projects. A founder member of Cwmni Da, Mr Huws, 59, said:

“I was also aware that it was now time to prepare the way for the next generation and the next exciting stage in the company’s story.
“I also wanted to ensure Cwmni Da remained in the hands of staff who have all contributed to its success.”

Mr Huws will remain as managing director for three years while the transition is completed.
As part of the process, the head of production finance, Bethan Griffiths, who has been a member of staff since 2007, and financial consultant Alun Lewis from BIC Innovation Limited, have already joined Mr Huws on the board of Cwmni Da. In addition, three trustees including a staff representative will be appointed to look after the employees’ interests. Mr Huws added:

“In recent years, consolidation in the independent production sector has seen several Welsh companies being sold to larger entities, this means more often than not that ownership is no longer in Welsh hands.

“It would be easy to sell Cwmni Da and then step away but I wouldn’t like to think that people that I believe in and respect suddenly lost their jobs because new owners had come in and wanted to do something different.”

“I went down the path of trying to look at different company models and structures and one that everyone is familiar with is John Lewis and Partners.

“Creating an Employee-Owned Trust feels like it is a perfect fit because I believe passionately that the staff are a key part of the business and that they can all benefit from their efforts.

“Shares will be held on behalf of the workforce in a trust fund and the trading company will need to prove to the trustees that the decisions that they’re making are beneficial to the workforce.

“The workers can earn nearly £4,000 a year tax free if the trustees decide that the company is in a position to share profits. There are incentives for everybody to make this work.

“The Employee-Owned Trust is a new model for the television industry in the UK and it’s a structure that shows a real commitment to the workforce.

“It places a value on the wider significance of Cwmni Da to the Caernarfon area and will ensure the company remains in the control of local Welsh people.

“Although I am now the only shareholder, Neville and Ifor are also keen to ensure a successful future for Cwmni Da and they will remain involved with the company for some time.

“Transforming the company into one that is owned by the employees is an exciting challenge that will ensure the talented staff who’ve been central to the success of Cwmni Da can continue to flourish.

“Succession planning is at the heart of the plans for the future and a timetable has been put in place, working with recognised experts in this field to lead us through this process.

“Maintaining our close relationship with our main customer, S4C, is extremely important and there are also exciting opportunities for independent companies like Cwmni Da to prosper in markets in the UK and abroad.

“Cwmni Da is built on strong foundations and establishing the Employee-Owned Trust will enable the company to develop as a successful business and ensure it remains rooted in the community and the local economy for many years to come.”

Broadcast Awards Nomination For Deian a Loli
Scroll to top